Sign up for our free 30-Day Respect Challenge
You are here: Home / Lists / 10 Ways to Stop Arguing with your Spouse
1.0K shares 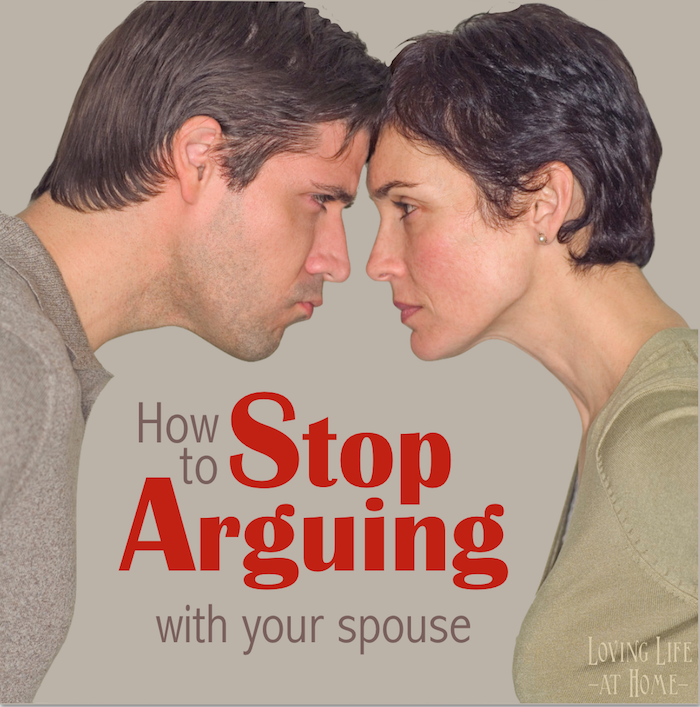 How can I stop quarreling in my marriage?

That’s the message one of my readers sent in a few weeks ago. Only eight words, but they describe a big problem.

How can the solution to such a simple, straight-forward question be so elusive?

Even in the best of marriages, couples will occasionally “butt heads.” How do we keep conflicts from spinning out of control?

My husband and I have known each other for almost thirty years, and we’ve been married for nearly twenty-nine. Since we’re both firstborn and innately stubborn, I can assure you that in those three decades, we’ve had our fair share of arguments. But in the process, we’ve learned a thing or two about how to stop an argument before it starts.

Our Top 10 Tips for Couples who Want to Quit Quarreling:

These ten practices aren’t theoretical; they are tried and true. My husband and I have been using them with great success for over a quarter century now. Sure, we still have impassioned discussions from time to time. We have different personalities and do not always see eye-to-eye.

But we are also a team. We are committed to marriage in general and to each other in specific, and we can attest that these guidelines, coupled with God’s unsurpassed grace, have kept those disagreements from driving a wedge into our relationship and causing a split or an all-out war.

What’s more, these principles (with the exception of #10) can be used to avoid arguments in your other relationships, as well. For more on this topic, read this post. Do you have a good secret for keeping the quarreling at bay? Please share in the comments below. Thanks!

1.0K shares
« Can a Married Woman Have Male Friends?
Is It Wrong for Singles to Think about Sex? »