Sign up for our free 30-Day Respect Challenge
You are here: Home / Feminism / Crisis Pregnancy: A Tale of Three Babies
738 shares 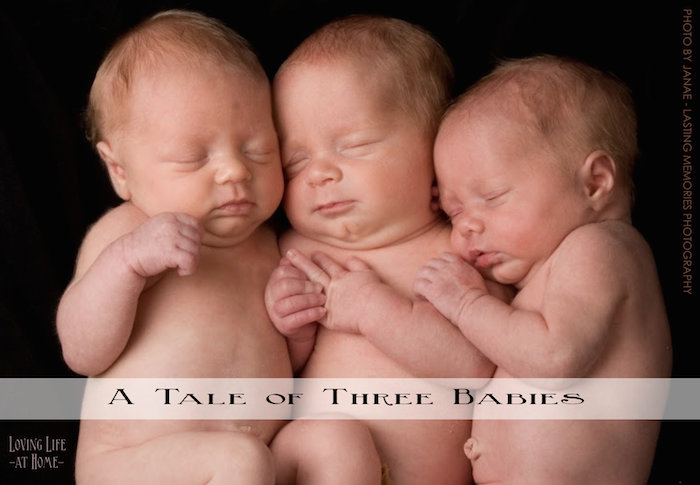 Countless women across the globe face crisis pregnancies every day. This is the story of three such women, and how each chose to deal with the difficult circumstances she faced.

“I’m getting an abortion, and nothing you say is going to talk me out of it.”

That’s what a friend of ours was told by his girlfriend when he “accidentally” got her pregnant, twenty-some-odd years ago.

Having a baby at that point in their lives would necessitate tabling many of those other plans. Possibly forever. So they decided terminating their “crisis pregnancy” would be the easiest and most expedient thing to do.

I think our friend was initially relieved by this choice — it meant he could postpone shouldering any real responsibility for a few more years — but as the date for the procedure drew nigh, he began to have second thoughts.

Hence, his eleventh-hour call to my husband to confess what was about to go down: The abortion was scheduled for 8:00 the following morning. He’d done everything he could to dissuade her, to no avail. She was determined to go through with it.

I don’t know what our friend expected my husband to do with this knowledge. Perhaps he thought he’d just shake his head or wring his hands and commiserate, “Well, at least you tried….”

If so, he was wrong.

“Maybe Jennifer could talk to her,” Doug suggested instead.

The expectant father suddenly seemed a little nervous. Not only did he refuse to give us his girlfriend’s number — he wouldn’t even tell us her name.

But he grossly underestimated Doug’s resourcefulness and resolve… and the concern we both shared for his unborn baby.

We didn’t know the patient’s name, but we knew the name of the clinic and what time she’d be there. So after much prayer through the night, Doug drove me downtown early the next morning and deposited me on the doorstep of that very clinic, our own infant son in my arms.

I explained to the girl at the front desk that I was late on my cycle and had heard their clinic offered free pregnancy tests (true on both counts). Might I get one, please?

She had me fill out some paperwork (I’ve been on Planned Parenthood’s mailing list ever since — a great source for insider information), then grabbed a test kit, led me to a restroom in the very heart of the clinic, and left me to do my business.

Clasping baby to my shoulder, I peed on the strip, washed my hands, then took an intentional wrong turn when exiting the bathroom in an attempt to track down the girl I’d come to see.

I found her sitting in a nearby waiting room next to the father (which is how I recognized her). Sliding into the seat beside her, I tearfully urged her to reconsider. I showed her my sweet little baby and begged her to take pity on her own.

Security showed up in a matter of seconds to escort me from the premises, but not before this pregnant mama had heard my entire spiel. She, and every other patient within earshot….

“Your baby’s going to die, and there’s nothing we can do about it.”

About the same time Couple #1 was dealing with their crisis pregnancy, some other friends of ours were facing a pregnancy crisis of a different sort.

Having already been married for a couple of years, they were ecstatic to learn a new baby was on the way — their first! But that initial excitement evaporated into thin, sterile air as they sat in their obstetrician’s office after a routine sonogram.

“Your baby has severe pulmonary atresia,” the doctor told them frankly.

Translation? Their baby essentially had no lungs. And as it would be impossible to live without them, they were advised to terminate this pregnancy and try again later. Better luck next time.

But these friends were staunch Catholics, so an abortion was completely out of the question. They believed in the sanctity of life. They loved their baby. And they were determined to carry and care for him as long and as well as they possibly could.

In the meantime, they’d pray for a miracle. And pray, they did. They, and everyone else who knew them.

Even so, every subsequent sonogram — all twenty-three taken over the course of the pregnancy — showed the exact same defect. The prognosis remained bleak. The situation seemed hopeless.

They carried the heavy burden of that knowledge for the full length of the pregnancy. No lungs! The due date was rapidly approaching. Their baby would be born soon, but he’d never draw a single breath….

“She’s getting an abortion, and I don’t want to hear anymore about it.”

My husband overheard a friend make this statement several years back. The people with whom the man was talking were aghast that he would even consider such a thing. Yet the more they argued against it, the more adamant he became.

Although my husband was in agreement with the vocal majority on this issue, he listened to the conversation from a distance, resisting the urge to jump on the bandwagon or join in the discourse.

Later, when he and his friend were alone, Doug asked gently, “I couldn’t help but overhear what you were saying to the others earlier. What’s going on? It sounds like you’re having a rough time.”

No shock. No judgment. No outrage. Just sincere interest and genuine concern.

The friend immediately dropped his defenses in response.

“It’s my wife,” he sighed, the worry evident in his voice. He explained how life-threatening her first pregnancy had been. How frighteningly close she’d come to dying in the delivery room. How afterwards they had taken drastic measures to ensure she wouldn’t conceive again.

Yet, against all odds, she’d gotten pregnant anyway.

“We’ve always been pro-life,” he confided, his voice raw with emotion, “but I don’t know what else to do. I can’t face the thought of losing her. I need my wife. Our child needs his mother. I don’t know how we’d cope if anything happened to her….”

My husband listened empathetically, admitting that it was a tough call.

There’s such a wide spectrum of reasons why a woman would choose to terminate a pregnancy, Doug noted: “On one hand, we have ectopic pregnancies where the baby is developing inside the fallopian tube and has zero chance of surviving, while mom has almost a 100% chance of dying unless something is done. On the other hand,” he continued, “we have women getting abortions so they won’t have to miss their annual ski trip.”

Clearly, this friend’s crisis pregnancy was much closer to the ectopic end of the spectrum rather than the elective end.

“I can’t tell you what to do,” Doug told him, “but I can pray that God gives you and your wife wisdom as you make that decision yourselves. And that’s exactly what I will do. But first, let me tell you a story about some friends of ours….”

The Rest of the Story

Doug then proceeded to tell him about Baby #2: Our friends were pregnant with their first child. Two dozen sonograms taken throughout each stage of pregnancy indicated the baby had a fatal birth defect that would make it impossible to survive outside the womb. Every specialist the couple saw recommended an abortion, but our friends refused, choosing instead to pray for a miracle.

And do you know what?

A miracle is exactly what they got. Their crisis pregnancy had a happy ending. The baby was born perfectly healthy, the pride and joy of his parents.

Their physician confirmed this. “I know what I saw,” he told them. “I didn’t misread 24 sonograms. If this baby has healthy lungs, it’s because God answered your prayers.”

I wish we had a happy ending to share for Baby #1, but his mama went through with the abortion, despite our earnest pleas to spare the baby. None of us know what might have been had she decided differently.

I still think of her occasionally, though. Did she later come to regret her decision?

I suspect she eventually did, as the majority of post-abortive women do. I pray she is no longer haunted by it, however, but has by now discovered the forgiveness that is found only in Christ.

And Baby #3? Those parents very prayerfully decided to keep that one, too, reasoning if God overruled their best efforts to prevent conception, He must have a very special purpose for that little one’s life.

Mother made it smoothly through both pregnancy and childbirth with no complications, and today the family is healthy, happy, and whole.

So that’s my Tale of Three Babies. Three different couples, three different cities, three crisis pregnancies, but all facing the same decision: Will we end this story before it ever starts? Or will we let it play out, and see what happens?

Tomorrow is “Sanctity of Human Life Sunday.” It is a day for Americans to remember the 1.2 million babies a year in our country who, like Baby #1, are never given a chance to live happily ever after.

If you are expecting a baby right now and are facing a crisis because of it, help is available. Please don’t let this story end before it ever begins. Choose life for your little one.

Related articles:
Something You Can Easily Do from Home Saved This Baby from Abortion
Oversold Prenatal Tests Spur Some to Choose Abortion
Dear Woman Who’s Getting an Abortion Tomorrow
We Know They are Killing Children