You are here: Home / Feminism / Stating the Obvious: Men and Women are Different
1.3K shares

“I feel like the feminine has been a little undervalued,” she told Harper’s Bazaar UK. “We all have to get our own jobs and make our own money, but staying at home, nurturing, being the mother, cooking – it’s a valuable thing my mum created.”

The interview is published in the magazine’s May issue. As May is also the month most of the world celebrates Mother’s Day, these sweet comments about the choices her own mother made seem altogether fitting and appropriate.

But Dunst didn’t leave it at that. “Sometimes,” she continued, “you need your knight in shining armour. I’m sorry. You need a man to be a man and a woman to be a woman. That’s why relationships work.”

That’s the part that really got feminists’ dander up. The most militant of this movement want us to believe that men and women are not only equal, but are also identical — or, at least, they would be if society didn’t keep imposing gender-based expectations upon them.

Anyone who dares suggest that sex-based differences do exist (and to our benefit, even) is ridiculed.

Despite all the so-called progress that has been made toward masking such differences, women have lost far more than they’ve gained in the sexual revolution. In attempting to style ourselves as men, we’ve squandered the power we have as women.

The more women behave like men, the less inclined men are to stick around (or to exhibit the more virtuous of masculine qualities when they do). Instead of being cherished and protected, girls are being used then dumped, in the wake of which they grow lonely, depressed, bitter, and/or angry.

Dunst may not realize it, but her comments underscore some important scientific findings. Cutting edge research has demonstrated that — lo and behold — men and women actually are different. They are different in the way their bodies are built (a fact that seems obvious to any two-year-old, but eludes elitist academicians), in the way their brains process information, and in the way they respond to stress, to name just a few.

Furthermore, relationships do work better, last longer, and provide greater satisfaction when traditional gender roles are embraced. The studies that support such notions are numerous, rigorous, and well-documented. You can read more about them in the following excellent books, all of which I highly recommend. 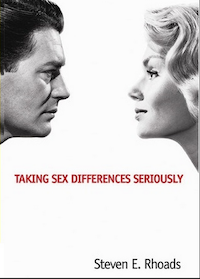 If you’d like a better appreciation of just how different men and women really are, TAKING SEX DIFFERENCES SERIOUSLY

To be totally honest, I didn’t care much for Chapter 3 (in the section aptly named “Men Don’t Get Headaches”). It’s not that I questioned the validity of what is there written; it’s just that I felt a little uncomfortable with so graphic a glimpse at the way (many) men think. The rest of the book, however, is riveting, and the chapters on Fatherless Families, the Sexual Revolution, Day Care, and Title IX Sports are particularly enlightening.

EXCERPT: “There is a certain unworldly quality to the suggestions that a just world would be one in which men and women do all things equally. This understanding would require that parents who are trying to tease out their children’s natural abilities should instead do their part to help achieve a society in which a higher percentage of people do things they are not interested in and not very good at…. In the real world, any society will and should want to encourage people to do worthwhile things that they enjoy and do well. This means that natural inclinations will have policy and normative relevance, although they will not always be conclusive.” 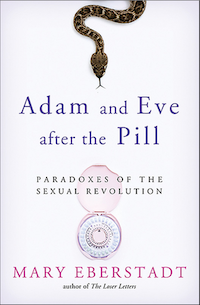 Mary Eberstadt’s ADAM AND EVE AFTER THE PILL

is a tightly written treatise which examines many of the devastating if not unanticipated consequences of the sexual revolution, including the erosion of the nuclear family, the rise in production and consumption of pornography, the disturbing social trends on college campuses across the continent, and society’s shifting ideologies concerning both food and sex.

As bleak as the subject matter may sound, Eberstadt ends every chapter on a hopeful note by presenting evidence, however scant it may be, that the tide is slowly beginning to turn.

EXCERPT: “In the postrevolutionary world, sex is easier had than ever before; but the opposite appears true for romance. This is perhaps the central enigma that modern men and women are up against: romantic want in a time of sexual plenty. Perhaps some of the modern misery of which so many women today so authentically speak is springing not from a sexual desert, but from a sexual flood — a torrent of poisonous imagery, beginning now for many in childhood, that has engulfed women and men, only to beach them eventually somewhere alone and apart, far from the reach of one another.” 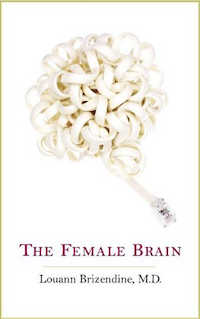 Louann Brizendine tackles the topic of THE FEMALE BRAIN

with a no-stone-unturned thoroughness one would rightly expect from a medical doctor such as herself. Almost a third of the book’s 279 pages are devoted to endnotes and reference citations. She tackles the topics of love, trust, sex, hormones, mothering, depression, and aging, all from a neurological standpoint that is both scientifically accurate and simultaneously easy to read and understand.

EXCERPT: Most women find biological comfort in one another’s company, and language is the glue that connects one female to another. No surprise, then, that some verbal areas of the brain are larger in women than in men and that women, on average, talk and listen a lot more than men. The numbers vary, but on average girls speak two to three times more words per day than boys. We know that young girls speak earlier and by the age of twenty months have double or triple the number of words in their vocabularies than do boys. Boys eventually catch up in their vocabulary but not in speed. Girls speak faster on average — 250 words per minute versus 125 for typical males…. Even among our primate cousins, there’s a big difference in the vocal communication of males and females. Female rhesus monkeys, for instance, learn to vocalize much earlier than do males and use every one of the seventeen vocal tones of their species all day long, every day, to communicate with one another. Male rhesus monkeys, by contrast, learn only three to six tones, and once they’re adults, they’ll go for days or even weeks without vocalizing at all. Sound familiar?” 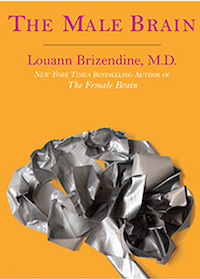 is a fast and enjoyable read. This book is significantly shorter than its counterpart, THE FEMALE BRAIN — despite the use of a larger font and wider line spacing, it is only 132 pages (excluding appendices and footnotes) as opposed to 187. However, given the fact that a man’s brain apparently remains fixated on one consuming thought from puberty to the golden years and beyond, perhaps the book’s brevity should come as no surprise. Still, Brizendine draws upon numerous scientific studies to paint a fascinating picture of how a boy’s brain develops and changes, beginning in utero and continuing through every stage of his life. She includes chapters on The Boy Brain, The Teen Brain, The Mating Brain, The Daddy Brain, and the Mature Male Brain, with several others interspersed between. It would be a helpful read to anybody who must deal with boys or men on a regular basis.

EXCERPT: “By age five, according to researchers in Germany, boys are using different brain areas than girls to visually rotate an object in their mind’s eyes. The boys mentally rotated the pictures of the objects by using both sides of their brain’s spatial-movement area in the parietal lobe. Girls used only one side to do the task. While that in itself is revealing, what I found most intriguing is that this spatial-movement area in the male brain is locked in the ‘on’ position. That means it’s always working in the background on autopilot. But in the female brain, this parietal area is ‘off,’ waiting in standby mode, and not turned on until it’s needed.

“Curious to find out how this applies practically in the classroom setting, researchers studied students in a grade-school math class to see how girls and boys solved conceptual math problems and how long it took them. The boys solved the problems faster than the girls. But what was most surprising to the researchers was that most of the boys, when asked to explain how they got the answer, gave an explanation without using any words. Instead, they squirmed, twisted, turned, and gestured with their hands and arms to explain how they got the answer. The boys’ body movements WERE their explanations. Words, in this instance, were a hindrance.

“What also got my attention about this study was what the researchers did next with the girls. In the following six weeks of the experiment, they taught the girls to explain their answers with the same muscle movements the boys had made without using words. At the end of the six weeks, once the girls stopped talking and started twisting and turning, they solved the problems as quickly as the boys. The male and female brains have access to the same circuits but, without intervention, use them differently.”

If you think these titles look interesting, you’d probably enjoy the ones recommended in this post, as well: 5 Must-Read Books for Women Who Think