Sign up for our free 30-Day Respect Challenge
You are here: Home / Lists / 7 Ways to Ruin Your Marriage
351 shares 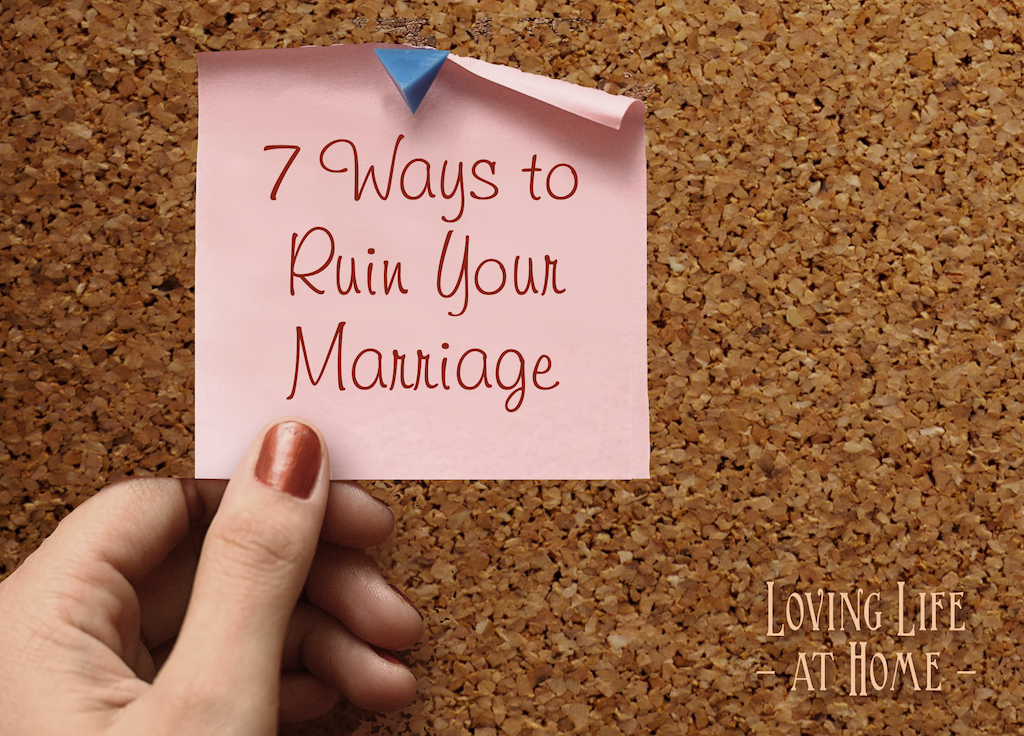 Earlier this week, I spotted a clever post on Money Saving Mom called 5 Ways to Ruin Your Day — Guaranteed.

Of course, nobody sets out with that goal in mind, but as I read through her list, I realized that from time to time, I’ve been guilty of every single one of them (with the possible exception of #3).

And sure enough, when I think back to days I’ve devoted to such self-defeating activities, they don’t normally rank among my most productive or joyous.

Nobody sets out with the goal of ruining their marriage in mind, but — unfortunately — that’s the position in which many couples find themselves.

Maybe if we could recognize the habits that are undermining our relationships early enough, we could change our ways before it’s too late.

So, in that spirit, I offer you…

7 Ways to Ruin Your Marriage — Guaranteed:

The good news is, you don’t have to do all these things at once to ruin your marriage. Just doing one or two of them habitually is usually enough to make most couples miserable.

Of course, if you’d rather nurture your marriage than destroy it, then simply do the opposite of this list: Place more importance on your husband’s needs than your own (Philippians 2:3-4), focus on the positive (Philippians 4:8), believe the best (1 Corinthians 13:7), forgive freely (Colossians 3:13), shower him with respect (Ephesians 5:33), don’t deny him physically (1 Corinthians 7:3-5), and own up to your own failings instead of pointing fingers (James 5:16).

For more marriage wisdom and encouragement, check out the following books. They reject the faulty thinking of modern-day culture and build instead upon clear, biblical principles that are both time-tested and effective. 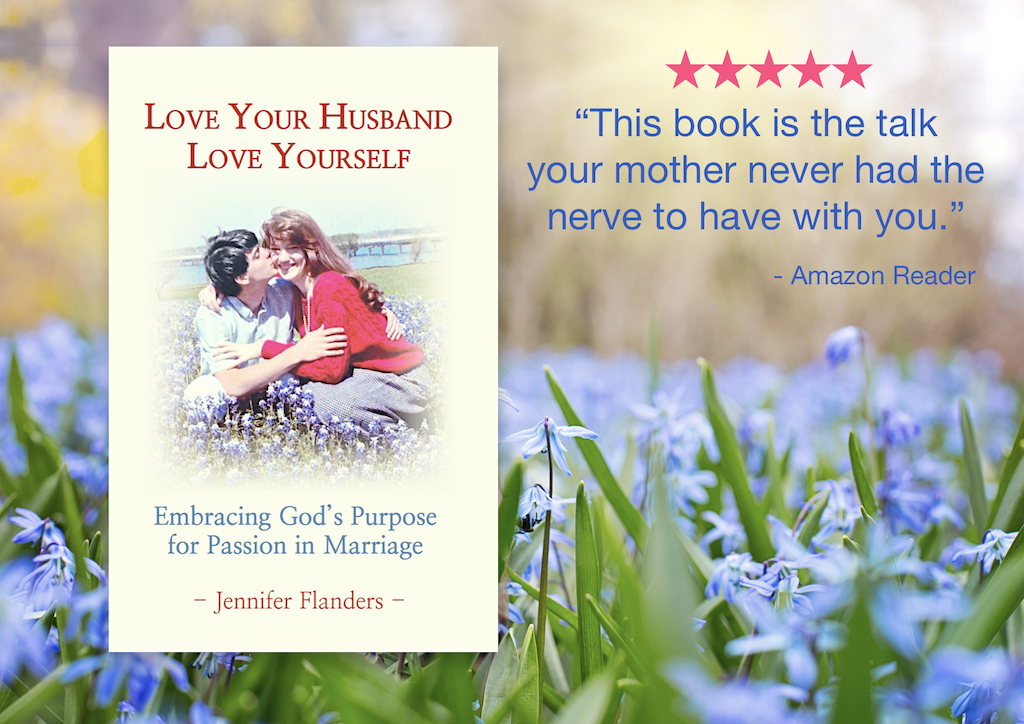 PLEASE NOTE: This post, 7 Ways to Ruin Your Marriage, contains affiliate links. If you make a purchase through any of those links, we may receive a small referral fee, at no extra cost to you. Such fees help defray the cost of running this website. This, in turn, allows us to continue offering our readers a wealth of FREE printable resources. So thank you for your support! 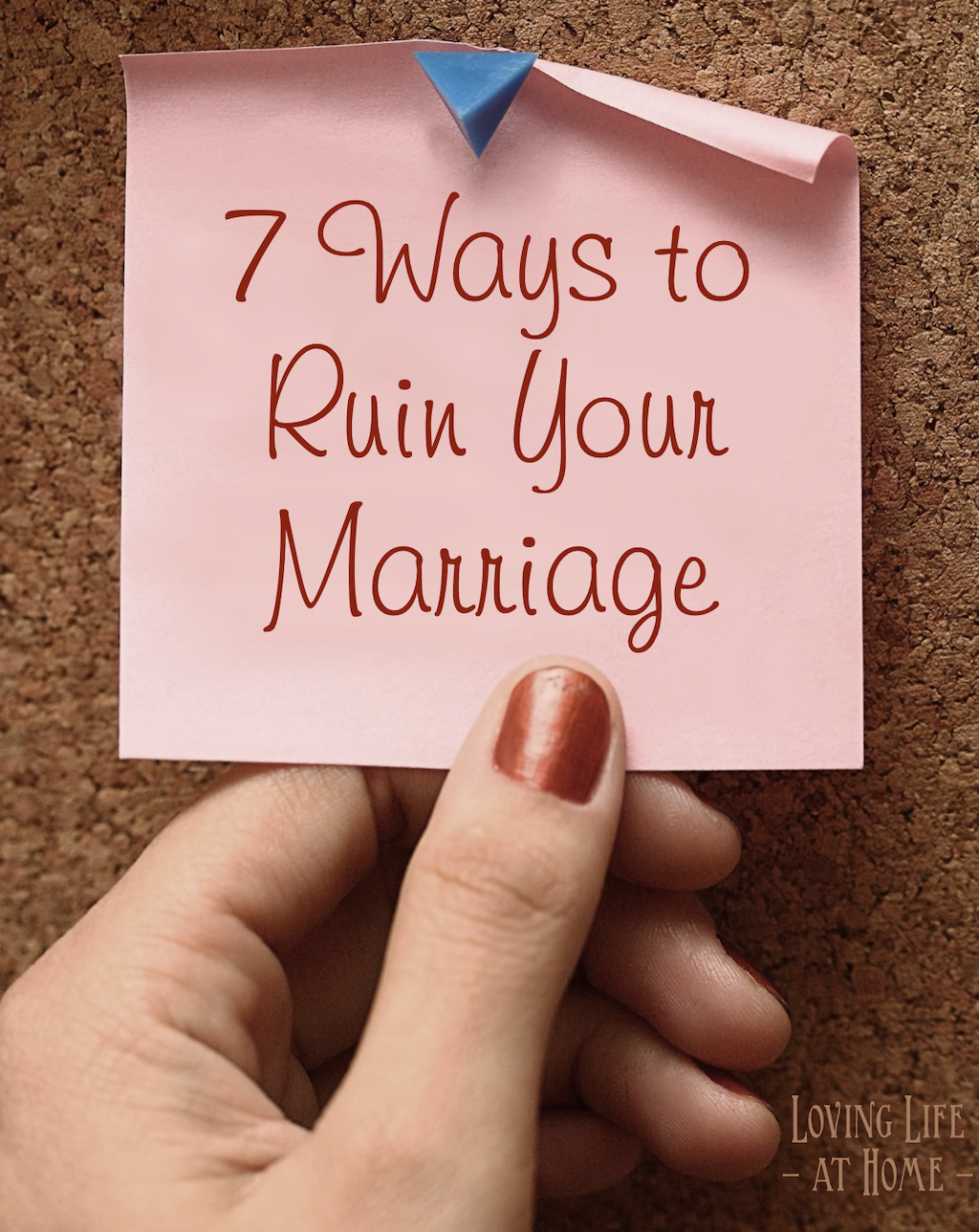 351 shares
« The Choice is Yours
Are You Saying Yes to Things that Really Matter? »