Sign up for our free 30-Day Respect Challenge
You are here: Home / Parenting / What Spiders Know that Moms Forget
646 shares 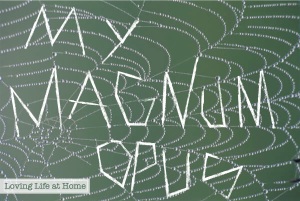 Moms are amazing. They birth babies. They make milk. They keep their household humming.

But spiders are pretty savvy, too. They spin silk. They weave webs. They provide for public pest control.

I’m not saying spiders are smarter than moms, but many mothers — myself included — could learn a few things from spiders in general and from one spider in particular: Charlotte A. Cavatica, the extraordinary and especial friend of Wilbur the Pig.

I had hoped to publish this post on Mother’s Day, but I was too busy mothering to finish it in time. Instead of writing,I was taking family bike rides, cheering at basketball games, bandaging boo-boos, and tutoring math. I was folding laundry, preparing meals, sweeping floors, and shopping for groceries. I was reading stories, giving baths, rubbing backs, and singing lullabies. And I was spending alone-time with my husband, in hopes of maybe even conceiving again!

In other words, I was doing all those things mothers do that normally go unnoticed: Things that seldom make national headlines or attract public attention. Stuff that — unless I photograph, tweet, or update my status — won’t get liked on Facebook or pinned on Pinterest.

These tasks, taken individually, appear rather ordinary and mundane. But cumulatively, they amount to my most important work of all.

And doesn’t that job deserve to be done with my whole heart?