Sign up for our free 30-Day Respect Challenge
You are here: Home / Parenting / Fathers Matter (Every Day of the Year)
135 shares 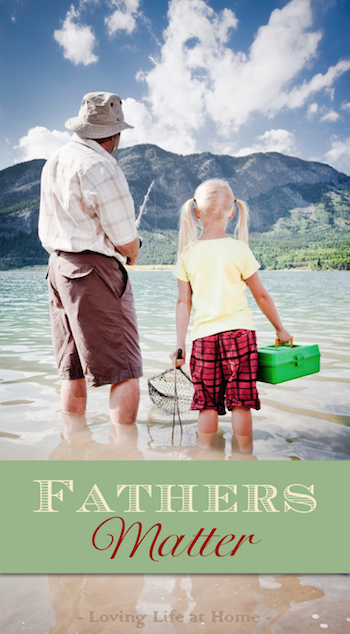 Last Sunday was Father’s Day — a day for celebrating the parent that goes largely unnoticed and under-appreciated the rest of the year.

Dads are under-appreciated partly because our society is no longer conditioned to hold fathers in high esteem.

Fathers have long been a favorite target of television sitcoms, where the vast majority of them are depicted as inept, irrelevant idiots more deserving of ridicule than respect.

For decades, fathers have been marginalized and emasculated and treated as if they have nothing of value to contribute to their family’s life beyond its economic support (if that).

And to the degree that life imitates art, men must fight against these stereotypes, not only in contemporary culture, but sometimes even in their own homes.

But another reason dads go unnoticed and under-appreciated is because so many of them are absentee fathers — they’re seldom around to attract any attention or appreciation.

This may be due to death, divorce, abandonment, or career choice; regardless of the cause, their absence comes at a high cost to the children they’ve left behind.

Despite what the liberal media might lead us to believe, fathers play a vital, irreplaceable role in the development of their children. Despite the divorce lawyers’ assurances that “kids are resilient and will quickly adjust to life without you,” the children rarely (if ever) escape such an ordeal unscathed. Most will carry scars from their parents’ split for the rest of their lives. 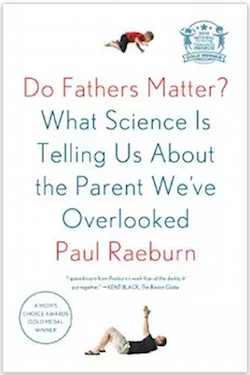 And while having a loving, engaged father living in your home, eating at your table, and taking interest in your life is not essential to success, studies show that paternal involvement makes such success a lot more probable.

According to a fascinating new book by Paul Raeburn, Do Fathers Matter?: What Science Is Telling Us About the Parent We’ve Overlooked

, the general consensus, at least in the research community, is that fathers do matter. They matter a lot.

Beginning before conception and moving through pregnancy, delivery, infancy, children, teens, and all the way to fathering in old age, Raeburn covers cutting-edge research that gives insight into how fathers shape their children, for better or worse.

The bottom line? When fathers are involved, everybody fares better:

The fathers themselves benefit.

And those findings are just the tip of the iceberg. I’d encourage you to read Do Fathers Matter? to get the details on the benefits mentioned above and to discover a myriad of others.

So what does all that mean for us? How should these studies affect our day-to-day lives?

For me — and these are my thoughts, not the author’s — this book serves as just one more reminder of how vitally important it is that I nurture my marriage. The next generation is counting on it!

No matter how much others would like us to believe that marriages are just contracts of convenience that can be dissolved without consequence, that simply isn’t true. When Mom and Dad go separate ways, the children are always affected.

No matter how often society argues that what consenting adults do in private should be of no concern to anybody else, their behavior does affect the community around them — especially the children.

And no matter how emphatically our culture insists that one definition of “family” is just as good as the next, the preponderance of research indicates there is an optimal design, at least when it comes to rearing offspring: that of a father and a mother firmly committed to one another and jointly and lovingly involved in the lives of their children.