Sign up for our free 30-Day Respect Challenge
You are here: Home / Goals / My Empty Nest List
569 shares

I distinctly remember crying when my firstborn was only four days old, because our time together was ticking by so fast. And sure enough, it seems like I barely blinked before he was grown and gone, with a wife and four sons of his own.

Although I still had nine little chicks in my nest when that first one fledged and flew away (and have added a couple more hatchlings since), I realized with a wince that, one by one, his siblings would soon follow. The next two are perched on the edge even now and will have flown off for good by late spring.

It’s a bittersweet time for mama bird. I’m proud and excited to see them go, so full of promise and potential, yet I’m painfully aware that our home will never be the same without them.

It’s hard to let go, and I don’t anticipate the process getting any easier. So several years ago, I began to compile what I call my empty nest list.

Some of the items on the list are things I enjoyed in earlier seasons of my life and would like to revisit:

Some activities are things I’ve never tried but am intrigued by:

Some are opportunities to minister in ways that my current responsibilities don’t allow:

Some entail expanding my skills in current areas of interest:

Some involve traveling to places I’ve never been before:

My original list is impossibly long, with more on it than one could hope to squeeze into a single lifetime. Some of the ideas may lose their charm long before I have time to devote to them, but that is okay. It was never meant to be a bucket list of exploits to check off before I die.

Rather, it was intended to serve as a reminder that life doesn’t stop when your last child leaves the nest. All sorts of new and exciting possibilities await, even after this precious, fleeting season of child-rearing comes to its inevitable end.

In the wise words of Dr. Seuss, we “don’t cry because it’s over, [we] smile because it happened.”

And then we do the next thing. What will yours be? 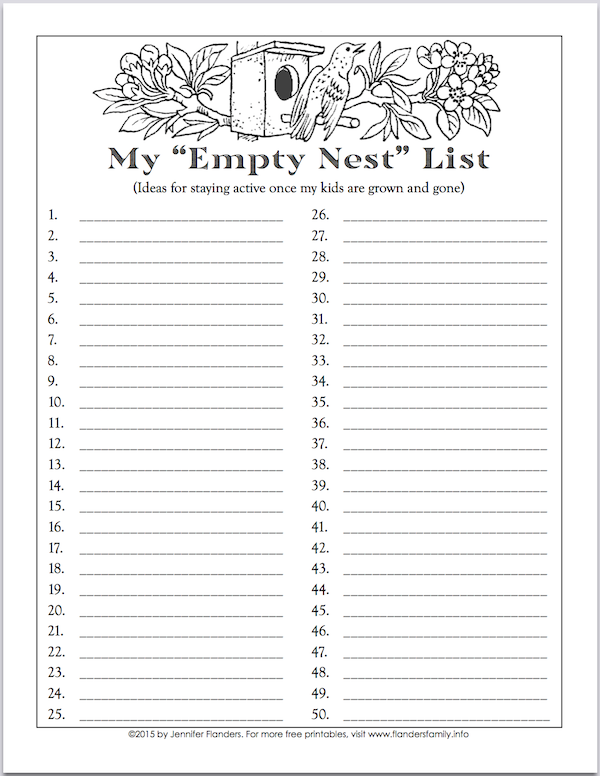