Sign up for our free 30-Day Respect Challenge
You are here: Home / Marriage / Is Virginity Really Worth Saving?
266 shares 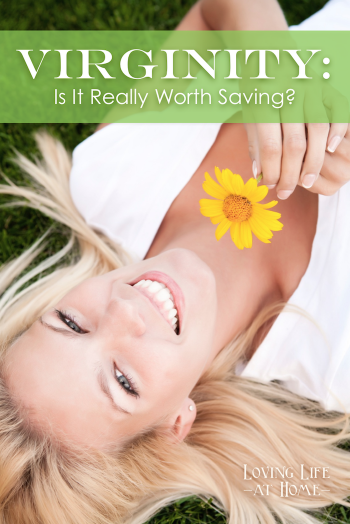 When you’re sweet-16-and-never-been-kissed, people write songs about it. But when that status hasn’t changed by your mid-twenties, people begin to look a little askance at you. That isn’t the way it should be. Not the way it’s been for thousands of years. But, unfortunately, that’s the culture our children are growing up in, where saving sex for marriage is considered terribly old-fashioned and virginity is regarded by many as more of a curse than a prize.

What follows is an essay written by my daughter Bethany. She is smart, sweet, beautiful, talented … and still single. She is also a member of that seemingly shrinking population of young people determined to maintain her virginity until marriage. (Stay tuned for another post next week on why I believe that’s still the best choice.)

Please don’t misconstrue the intent of what she has written here. As she assured her friends when she originally posted this essay on Facebook, she does NOT regret her choices. Nor does she think she’d be happier had she chosen a promiscuous lifestyle. She still believes that virginity is something worth saving:

“What I’m saying,” she writes, “is that I don’t know what ‘waiting for marriage’ is supposed to look like if marriage never comes. And I’m not just talking about sex and virginity. I’m talking about everything — so much of our identity and purpose in Christian culture is wrapped up in the idea of being a wife and mother.

“I know all about ‘Love & Respect,’ about honoring God by honoring your husband, about following him as he follows the Lord, about being a ‘help-meet.’ All of that was beautifully modeled for me.

“But seeking holiness and meaning as a single woman? Even when that singleness is indefinite? That I am having to learn vastly on my own and without an example. This essay wasn’t intended to condemn abstinence as antiquated and obsolete; it was intended to shed light on the loneliness that often accompanies choosing a path that most others have long-since abandoned.

“And hopefully, by reading this post, others who are in a similar situation will feel a little less alone.”

I was raised in the age of beanie babies and purity rings. Everyone I knew bought into the hype, with sterling silver rings on their left index fingers and rows and rows of beady-eyed bears lining their shelves. The rings invariably read “True Love Waits” and the pristine, heart-shaped tags on the bears invariably read “ty.”

Labels, you see, are of the utmost importance when you are 12 years old and still discovering what in this world – what in your own self – is of any worth.

But I never got one.

I had never been given that sort of offer, so I had no need for a ring to remind me to reject it.

And so I managed to escape puberty with naked fingers and not-naked everything else.

I did not, however, escape the beanie baby hype.

To be fair, I didn’t buy it myself. It was a gift. Brand new with tags and in a box that had never been opened, it came accompanied by a promise and a warning:

A promise that if I left it in the box, left it unopened and un-tampered with, that one day it would be worth a fortune.

And a warning that if I took it out – even for a moment – if I risked getting it dirty or losing those precious tags, it would be utterly worthless.

All my friends had beanie babies, and those beanie babies stayed in their boxes for days, weeks, months, even years. But eventually they all came out of their clear cubic prisons. The beanie babies were played with and shared, just like toys are meant to be. Their tags came off, as had been warned, and the fortune my friends might have had was forever lost.

Oh, but not mine. I heeded those warnings and hid my beanie baby away, safe from all the perils a carefree and careless childhood might bring. And as I watched my friends laughing and sharing and playing, I reminded myself over and over again of the fortune that awaited me if I just waited.

A lifetime has passed since then, a lifetime so very different from what my 12-year-old self imagined it would be. The purity rings and stuffed animals have long since passed out of fashion, ending up in garbage bins and garage sales and goodwill piles. But she is still here: my little brown bear with her heart-shaped tag, hidden safely in her box on my shelf – in perfect mint condition.

When people see her sitting there, their reactions are varied. Some are impressed that I’ve managed to keep her for so long. Some are nostalgic for the time when they, too, believed that a little stuffed animal carried with it all the hopes and dreams and promises of a prosperous future. But more often than not, it’s viewed as strange.

To be a quarter of a century old and in possession of such a novelty is an oddity, to say the least.

But despite all that, I’ve grown sentimental. I’ve had her for so long now that I could never just throw her out or give her away to a stranger like so many others before me have done. And in all honesty, I’m beginning to think that – despite all those pretty promises I was given at 12 – she isn’t worth anything at all anymore. She’s become nothing more than an odd remnant of a lost time that no one really wants to re-visit.

And somehow, by association, so have I.

But a part of me still secretly hopes that some day a collector will show up on my doorstep – an oddity, like me, who clung to those same childhood promises that I did. I imagine him falling to his knees and joyously proclaiming that she’s the one, the rare and unique treasure he’s been searching for his entire life. Then, at long last, she could come off her shelf and be exchanged for the fortune I was promised so long ago.

I wouldn’t mind parting with her then, because I’d know that she was valued. That she’d be cared for and treated with gentleness and respect.

It’s such a silly, pretty dream. With each passing year it becomes a little less realistic, a little more ridiculous.

But the hopeless romantic in me still clings to it, just the same.

So she sits there with me to this day.

A symbol of the innocence and hopeful naïvety of a childhood past.

Priceless? Worthless? I suppose that distinction is in the eye of the beholder.

We are both untouched.